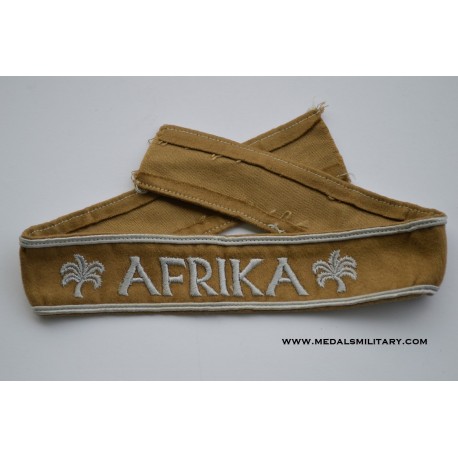 In late 1940 the Germans began the hasty formation of the DAK, Deutsches Afrikakorps, (German Africa Corps), under command of, then Generalmajor, later Generalfeldmarschall, Erwin Rommel, as an expeditionary force to assist their Italian allies in the disastrous North African campaign. The first units of the DAK arrived in Tripoli in February 1941 and under Rommel’s inspired leadership the DAK and their Italian allies were soon able to push the British back and bring some stability to the region. As a result of the German OKW, Oberkommando der Wehrmacht, (High Command of the Armed Forces), preoccupation with the invasion and battles in Russia and a lack of adequate supplies and reinforcements, the DAK would finally be defeated by the British in May 1943. Of Note: On July 18TH 1941, an "Afrikakorps" cufftitle was officially introduced for wear by personnel serving with the DAK. The "Afrika" cufftitle was introduced on January 15TH 1943 and was the second cufftitle in a series of four that held the status of a campaign award. The cufftitle was considered a military combat decoration, and as such, was bestowed with a corresponding award possession document. The basic criteria for award of the "Afrika" cufftitle, was a minimum of six months service in the African campaign, although personnel who had been wounded, contracted a tropical illness, or had won a military award, regardless of the time served in the African theatre were also entitled bestowal of the award. Of Note: With the introduction of the "Afrika" cufftitle the previously worn "Afrikakorps" cufftitle was ordered removed. Although the "Afrika" cufftitle was a campaign award most personnel who had worn the "Afrikakorps" cufftitle would have been eligible for award of the "Afrika" cufftitle.

4 other products in the same category: