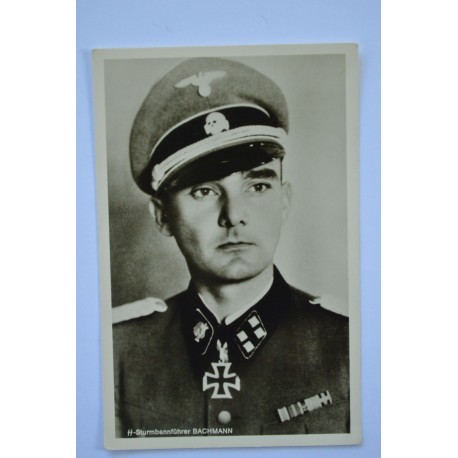 Christian Bachmann (23 November 1919 — 15 March 1945) was a Sturmbannführer (Major), in the Waffen SS during World War II who was awarded the Knight's Cross of the Iron Cross, an award given by Nazi Germany for extreme battlefield bravery or successful military leadership during World War II. Christian Bachmann was born on the 23 November 1919 at Nordlingen in Schwaben. He volunteered to join the SS and was awarded the Iron Cross 2nd class in June 1940. He was in 1941 commissioned as an officer, taking the rank Untersturmführer (Second Lieutenant). On further promotion to Obersturmführer(Senior Storm Leader) in September 3rd SS Division Totenkopf 1942, Bachmann was posted onto the staff of the III.Battalion, 1st Infantry Regiment, Totenkopf. In 1943 he was given command of the 11th Company, 5th SS Panzer Grenadier Regiment Totenkopf and also awarded the German Cross in gold. In 1944 he was given command of the II.5th SS Panzer Grenadier Regiment 5 Totenkopf. It was when in command of this Battalion that Bachman was sent to Budapest on 1 January 1945, and forced back the Soviet Union forces trying to take Budapest, several kilometers. It was for this action that he was awarded the Knight's Cross in February 1945. Christian Bachmann was last seen on the 15 March 1945, northwest of Stuhlweissenburg in Hungary. He was shortly thereafter declared missing in action, and posthumously promoted to Sturmbannführer.

28 other products in the same category: