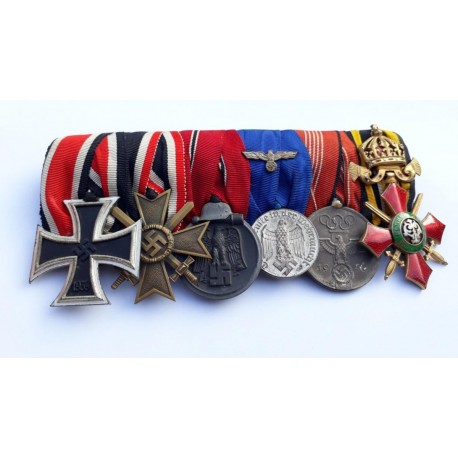 (Bandschnalle). A Third Reich period medal bar featuring six decorations, including a 1939 Iron Cross, II Class type Schinkel  (Eisernes Kreuz 1939 2. Klasse). A cross pattée of multi-piece construction with a blackened iron core (magnetic) within a ribbed border, with the period original ribbon, the obverse with a raised central mobile swastika with the re-institution date 1939 in raised numbering on the lower arm, the reverse with the original institution date 1813 in raised numbering on the lower arm, and in overall very fine condition. A War Merit Cross, II Class with Swords (Kriegsverdienstkreuz 2. Klasse mit Schwertern). A Maltese cross in bronze, the obverse with crossed swords between the arms of the cross and a circular raised border of oak leaves on the obverse with a raised mobile swastika in the center, the reverse presents a circular raised border of oak leaves bearing the institution date 1939 in raised numbering, and in extremely fine condition. An Eastern Front Medal (Medaille Winterschlacht im Osten 1941/42). A round medal constructed of zink with a gun-metal coating, the concave obverse features a NSDAP-style eagle grasping a swastika with a laurel behind it, the reverse features the text WINTERSCHLACHT IM OSTEN 1941/42 (WINTER BATTLE IN THE EAST 1941/42) featuring a crossed sword and branch below the text, a helmet and stick grenade connects the medal and loop, and in very fine condition.,and in extremely fine condition. (Dienstauszeichnung IV. Klasse für 4 Dienstjahre), a circular silvered metal (magnetic) medal, the obverse with the German eagle in the centre, circumscribed in German Gothic lettering Treue Dienste in der Wehrmacht (Faithful Service in the Armed Forces), the reverse with the raised number 4 centrally within an oak wreath border, on ribbon with silvered eagle, and in good condition. A German Olympic Commemorative medal for faithful co-operation; in silvered metal. A Bulgarian Order of Military Merit; Commander's Cross, finely produced in bronze gilt and enamels, inclusive of its crown suspension. All very nice condition. 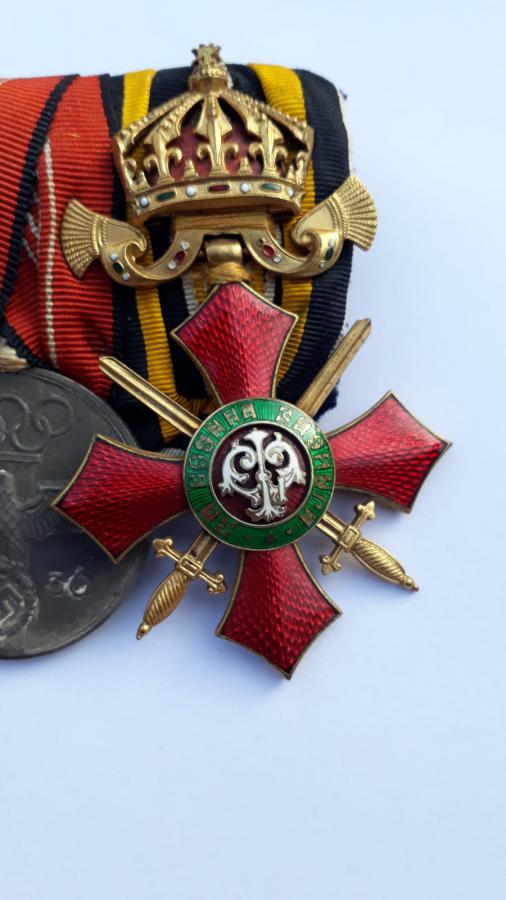 9 other products in the same category: